What's in a name?

Well...this is gonna be the next cover for the box set: 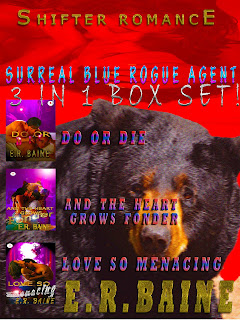 I know, I have to make the background lighter and the words in the foreground have to have a drop shadow but I'm just too beat to go any further with this. Most likely this cover might get 3 more before it is done for sure.

Anyway,...what is in a name? I laughed really hard when I saw this on Amazon:

But then I realized I did not give info on the character names, which is what I thought I would do when I first started to write my story.

So...how did I come up with the characters names?

Audrianna. Well, my grandmother's first name is Audrianna. Her maiden name was Whiltshire. And so that is the protagonist's name right off the bat. My Granny's real name. Everyone used to call her Audrey. Hence Audrianna's nick name. Audrey/ Audrianna, Whiltshire.

Viktor.Now, my grandfather's name is Edward. I really wanted to name the main male lead Edward and was researching what Edward could be in russian. But I hesitated to name Audrianna, the character in the series, husband Edward. On account of the lead of the twilight series being so popular and being named Edward. I sort of didn't want people to think that I took the name from another famous author. So I named Audrianna's love interest Viktor, cause I always loved the name Victor, and I had read a story years ago about a Russian Prince named Viktor and the name just stuck in my head. So I named the character Viktor. Now there are a million and one books about Russian Billionaires called Viktor these days.

Maxckmillian...hmm. The surname Maxckmillian is the correct surname. I know it is usually Maximilian...but I made up the name Maxckmillian. It is pronounced Max - SSSk-millian, I did that because there is an underlying theme of corporate dominance in the series, and many of my novels do, to tell you the truth, and the idea of Max-is-scum ie Max-x-ck(ssk)-um came to mind and I just rolled with it. Have zero clue if this is a real Russian name or not. I'm going to start a running gag about the name in the series in the next arc.

Lincoln. I am a huge fan of Abraham Lincoln and own a book of his writings. And so named Lincoln after him. Lincoln is very tall like Abraham Lincoln. Lincoln's last name is Huntington. I just loved the name, and so I named him that. I think it came out of nowhere, and somewhere. I really came up with his name nearly 15 years ago. I liked the name Hunt, because he is sort of a hunter, at least that was going to be his background. (Long story) But I was quite aware that Ethan Hunt was already taken.

My book to come up with names for my characters is this one right here: Virgin's The New Book of Baby Names by Emily Wood, 2000 Ed.

So I look up names that I like and decide based on the meaning. Sometimes though I do get lazy. I'm not as thoughtful with my names like I used to be...

Rees: Along with its other vaiations including Reece, this is a form of the Welsh name Rhys, meaning 'ardour'. At the end of the twentieth century, Reece was among the most popular names given to boys.

And right above that is this name right here:

Rayner: Originally a surname based on the words meaining 'advice' and 'army'.

So, there you go. Rees and Rayner.

Though I think it is highly appropriate since Rayner gives Lincoln such a hard time over Rees.

Quincy got his name for Quincy Jones. I always admired Quincy Jones because like a-million-and-one kids and he is on good terms with all of them. He puts many dead beat dads out there to shame. Quincy is kind of like the eye in the middle of the Audrianna and Rayner storm. He is the reasoning, mindful soul caught in between his brother and sister who are always at each other's throats.

Matsenêste King: The twist here is that I'm pretty sure Matseneste actually means Kingfisher, so it is King twice. I could tell you why I did that but...no spoilers. His nick is Mat, not meant to be Matt.
The reason why I say 'pretty sure' and not absolutely is because the website that once showed the meaning of theseNative American names is no longer up. I can't find it anywhere so I hope I do right by his tribe. ><'

Xin Xing: Alright there are a million and one grocery stores, Chinese food restaurants in my country Trinidad and Tobago named Xin Xing. This name is a shout-out to that reality. Have no clue if it is means anything at all.
Update on the rest of names coming soon...