Yo!
I'm totally-madly-inlove-deeply with KyloRen. Not Driver, the actor who plays Kylo,(though he is pretty darn good lookin' himself) but the villainous character. I don't know what it is about the maniacal villain that keeps his cool and just erupts in a bizzare cray-cray way when he looses it that is sooooo darn attractive. But it gets me every single time. 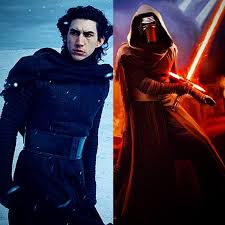 :
And annoyingly the KyloRen haters are out again. You know, just like you have those people that think they own the english language you'll have those fans that believe they have a right to rag on each and every Star Wars actor for their part. I realize that as a fan, I'll have to put up with it. It is still annoying to read.

Anyway, lets get right too it. Well I loved Star Wars: The Force Awakens. Like a lot of critics, I was disappointed that it was basically the same thing as the beginning. As a writer, I am a staunch advocate of not giving the audience what it wants ><' don't let your goal of producing an HEA or crowd pleaser hamper your goal of becoming  the next Shakespeare. But, as a fan of the entire Star Wars Universe, I loved it. It spoke to me. There was so much visual referencing to the original star wars in SWTFA that the they might as well be considered phallic - as a huge SWFan everytime one came up on screen I would swear JJ was trying to seduce me.

I'm refering to the use of all visual landscapes from Star Wars A New Hope, The Empire Strikes Back and Return of the Jedi being crammed into The Force Awakens, the scene where KyloRen comes across Rey in the forest when he went to find her and the droid being much like Luke fighting off Darth Vader in his day dream when he trained with Yoda in The Empire Strikes Back. Multiple forceful uses of Jedi mind tricks...Kylo Ren's stopping the blaster fire in mid-air at the opening of TFA being used as a cinematic exclamation mark at the beginning of the film...and of course Rey manipulating Daniel Craig in the stormtrooper when she got captured by Kylo Ren. Yep! He's in there.

Some people are ganging up on Kylo Ren for some issue with overacting. If you asked me actors that have to play the Jedi role in general don't have it easy. As an actor you have to convey emotion with one look, then as a Jedi, you have to keep in mind that a Jedi is not supposed to be ruled by their emotions. I remember with SW: Attack Of The Clones and Revenge Of The Sith thinking: boy Hayden Christensen had it real hard. It was like he was showing emotion, and in the same breath, trying to hold back at the same time. And in reality, that is all that lies in the inner workings of a Sith. At the same time, Ewan McGregor deftly showed no emotion. Which is how it should be. 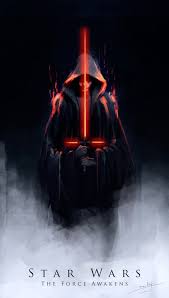 I think Driver did a great job in portraying this odd dynamic of being a figure that is supposed to be able to curb his emotions, but as we can see, has not been able to. Unlike Darth Vader, Kylo Ren is a sociopath that can barely control his temper. We see this when he pulls out his lightsaber and totally shredds the chair with the restraints when he walks in and realizes that Rey had escaped. Compare that to the scene at the end of The Empire Strikes Back when Vader acts really calm when Luke is jettisoned away in the Millenium Falcon, and Vader realizes that his son has escaped. Everyone thought that he would explode with anger, but he just calmly walked away. I thought that was such a cool scene.

I'm also impressed that Driver lost weight for the part, and that the makeup made him look really pretty, and young. It was a shock to learn that the man behind the mask was a normal looking guy. Unlike Darth Vader, whose malformity became increasingly obvious with each film.

Who is Rey? If I could take a guess, it is probably Luke's daughter. Yeah, I know, shippers may be linking Rey to Wan Kinobi and you'll probably see #RenRey romance fiction popping up on the net soon, if you haven't already. IMO, Rey will eventually turn out to be related to KyloRen, just a hunch since The Force Awakens seems to want to stick with the originaly ideologies that manifested in the original films. George Lucas always said he wanted to keep the films about a father and son story. And they did that in The Force Awakens when they made...
Okay Stop Reading A Real Spoiler Coming Up Here Folks!
...Kylo Ren Han Solo's son. Since they also cultivated a big reveal like Kylo murdering Han Solo, then they will probably keep the misdirection incestuous relationship going like what took place with Leia turning out to be Luke's sister. But they might still, of course, lead up to that, and then turn the tables on us mere fans and make Kylo and Rey unrelated, turn Kylo into a Snape character

Nobody expected Han Solo to be a major character - NOBODY!
Posted by chunksie at 8:56:00 AM