Urgh, can't believe I have to deal with this shit right before the launch of my new series.

Yo! Urgh. If you've read the shit that passes for news these days you would have come across this little known news post on the internet:

Yes I know, it goes without saying. However, since I have decided to treat my writing more of a business rather than as an on and off hobby like I am used to doing let me just say that I had nothing to do with this flier and do not condone mindless crap that people do i.e. spreading hate like a disease.

My new series "My Black Shiksa Goddess" book 1 starts out with the male lead confronting his crush next door, who happens to be black and female, for having the music turned up too loud. I just wanted to say that I in no way posted this flier and had anything to do with this story going semi-viral to promote my new short.

Personally, I don't believe this should have made the news in the first place. One thing you should realize from my twitter feed is that I am a news hound. If my TV is not on CNN, then it is on Cartoon Network or I am watching The Flash. Since the internet has blown up in recent years, I mean since so many grandmothers, mommys, kids, you know, less techy people have utilized the internet a lot of stuff that should not be considered news has become main stream news worthy.

Cute kittens, baby crying, and dogs playfully catching food in their mouths in slow-mo. I just don't feel this article is worthy of news. Now, most definitely this is either someone white/black, messing with people in the area wanting to cause a disturbance in a decidedly peaceful community and most definitely points to something else lurking in the person's character beneath the surface that may be violent and they should be revealed as to who did this so that they can't cause harm, or to make sure that this person has already not violently attacked someone, physically. But, I think raising awareness of this online only glorifies what this individual wanted to do. All the first person who saw that flier after the person who posted it should have done, was to do the community a service and pulled it off and torn it up. Don't give full on racists like this a world wide audience. That is what they want. Make the police take the flier and do fingerprinting on it and let the community be informed on who it is so that some thing can be done about this divisive person.

In the mean time, check it, I already finished book covers for book 2 and book 3 in my new Black/Jewish Romance series (Yeah I know, Black/Jewish. Only I could think of doing that ><'): 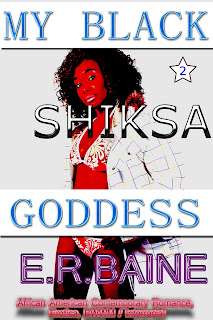 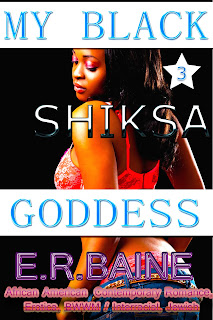 Well, just wanted to add a disclaimer for my novel just so you know. But no matter what I say some boob is going to read the book and associate the beginning with the article so they can appear like a smart ass on the internet. "Oh look E.R. Baine in being racist by including a scene about black people pumping up the music too loud." Urgh. You know I really should not have to deal with such empty-headedness but that kind of base line thinking will always go with the territory of being a writer.

If anything this article proves the point that I have been trying to make for years. The World revolves around me. Doubt that? How coinci-donc is it that three days before my book is released that this nonsense makes the news? And manipulates something bogus and asinine that is totally relatable to what I am writing about. Even the name of the online sharer's name has an attribute that closely resembles my real name. This is absolute proof that the world revolves around me. So if you are having a bad day feel free to blame me, even though we have never met. And if you win the lottery, don't forget, you owe me half.

Thank You to my fans! And why I write.

Just wanted to offer my thanks to all those who signed up to accept my book for review. To be quite honest, I don't care about reviews. However, I'm not a boob. I know that you have to have many and good reviews to make it as a writer these days. But as far as reviews go personally, you can barf me a river.

I'm way beyond the point of some writers wanting to write to prove that they are especially smart individuals that know how to write books. I don't need praise for satisfaction. And I honestly just don't care. But I know that that stupid drop down box in the corner of the screen for Amazon and Nook and all those other sites that make you average out reviews are sooooo important to a lot of people so, I get it, I will try to get reviews. But honestly, I don't care. If I could afford it I would just be like Samsung and hire a ton of people to beef up my reviews online and screw all of you over with fake, happy 5 stars. Eh, I don't care.

Yeah, some pleeb actually emailed to tell me that they wanted to apologize for not liking my book. Some blogger. And I was like seriously, you could just suck it. Of course I did not tell them to suck it. But I only care about my fans and the people who stick with my story. And those fans would only measure up in time as the series progresses. They matter to me. People who don't like my book - I don't care. I'm not in the business of writing to *rabbit ears* improve myself *rabbit ears*. Or to cater to the mass market.It is a mix of my own feelings about what I feel the meaning about being a writer really is.

I had always admired J.D. Salinger's lifestyle. Of how he remained a recluse all his life. And yet, continued writing. And then, as a writer, I had always disapproved of Emily Dickinson not having published many of her work during her lifetime, though she was a recluse. I think it is doubly upsetting about her life because she was a woman. I believe all women should write and publish their work. I find that posting my work online gives me the ideal in-between.

So I'll stick with editing and formatting my books and publishing them online because as a woman and black I feel I should add a level to the equation to support the African diaspora. As far as history goes. But I seriously don't think that I am going to be Martin Luther King's or Toni Morrison's plus one in that arena. ><,

All I'm saying is don't be surprised if years from now I suddenly close down all my online ebook publishing accounts and only people who subscribe to my newsletter get a copy of my books via email. Quite frankly, the act of formatting my books and publishing them online is becoming seriously tedious. I think I have reached the point in my life where if I don't become a popular writer, my dream of becoming a writer will not be the "dream deferred". As long as people who appreciate my work read my work, as long as I can share my art with people who enjoy it, that is cool enough for me.

*And least we forget the extra pocket change ain't that bad either.